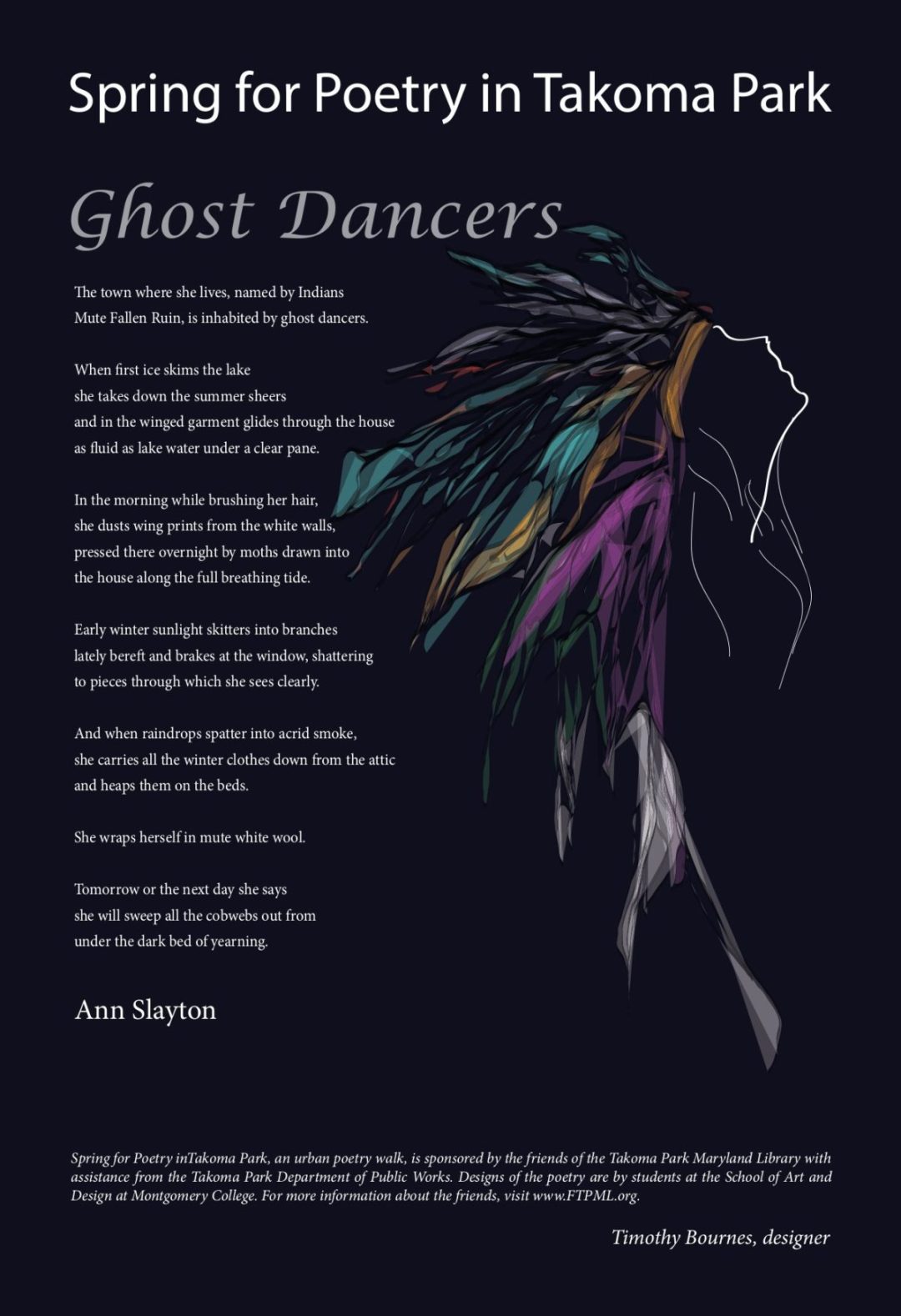 Spring for Poetry in Takoma Park 2018

If winter comes, can spring be far behind, wrote the English poet Percy Bysshe Shelley. The succession of flowers will soon be springing up throughout the city and in April, along Carroll Avenue from the Junction to Old Town, new poetry posters will have seemingly sprung anew as they have over the last eleven years.

In 2007, the Friends began collaboration with the Montgomery College School of Art and Design in which second-year graphic arts students design poetry posters of poems that a small committee selects. Friends board members Merrill Leffler and Michele Morgan have been presenting the program to students each year and giving them critical feedback on their initial designs. Many of those designs are stunning -there are more than 200 posters, most of which can be seen on our Spring for Poetry archive page.

Conceived by Leffler, Morgan, and Ann Slayton, the Friends have the posters professionally laminated, then frame and mount them on specially installed polls, assisted by the city’s Public Works department.

This year’s selection of poems range from “The Garden” by a 13th century Arabic poet, Abd Allah ibn al-Simak, to poems translated from the Spanish of Gederico Garcia Lorca and Daisy Zamora, from the Hebrew of Moshe Dor, and from the Welsh of Anthony Raftery, as well as poems by such American/U.S. poets as Robert Frost, Maya Angelou, Marilyn Nelson, and two poets who live in the metro area, E. Ethelbert Miller and Terence Winch.

Keep an eye out later this spring for this year’s poem’s.

See what’s happening with the Friends!

Check out our list of events over the coming months.

Join the Friends of the Takoma Park Library and support our education and outreach efforts! Become a Member

“In the past 24 years the Friends have been of inestimable value to our Library – both in raising funds, advocating for us at the State and local levels – and keeping us at the forefront of community attention and concern. They introduced our first public internet stations, engaged us in the wonderful Spring for … END_OF_DOCUMENT_TOKEN_TO_BE_REPLACED